A downloadable cube for Windows and macOS

"LeWitt first chose to work with the cube in the 1960s because he found it the 'least emotive' three dimensional form; he chose white 'because it was less expressive than black.' Nevertheless, both the cube and white do have powerful emotional resonances and expressive effects. LeWitt was not indifferent to this, having observed that 'Three-dimensional art of any kind is a physical fact. This physicality is its most obvious expressive content.'"

"One can play CUBEISM and understand it as a cute exercise exploring Unity camera tools, math and minimalist game design, but one can also understand it as a piece of conceptual art which works as an intertextual, hypertextual satire of the very media to which it pays homage. The limits of our imaginations when it comes to these intersecting media are exposed, simply but boldly, and the intimation is made to us that we can, once again, burst those limits open." -Lana Polansky

my own thoughts on making CUBEISM :

CUBEISM feels like a tutorial because when I started working on it I was actually just interested in playing with layering multiple camera views on top of one another. the cube was a utilitarian choice, the easiest object to put in a scene and see whats happening. primitive shapes are placeholders, a stand in for future content which is most likely representative of something else (modelling an object, posing as another thing). At some point I realized that I was doing a very literal, real-time version of cubism-- putting multiple views of the same object onto the same 2D surface. I don't remember if there was an original plan beyond just learning about Unity. I find that doing tutorials just to 'learn' arbitrary tools doesn't help or interest me. It's a never ending series of things that could be helpful in the future. I learned how the cameras work by using them and adjusting all the settings that were exposed in the interface. If something unexpected happened only sometimes would be able to figure out what caused it (sometimes not until much later, working on a different piece). Part of my overall goal was to find a way out of the trap of making work that was simply reactionary to what I still feel are problems with video game design. Too many ideas I had felt flat, usually about taking a game concept that is supposed to be fun and making it just badly enough that it was not particularly fun but mildly engaging. The interest created by the placeholder object suddenly became an escape. Placing limits on the content, nothing other than a cube, lights, sounds, and cameras, and the interaction, using the arrow keys to rotate, allowed me to bypass concerns of players 'figuring out' how to play. This meant that the game could take its own form and not be bound by the potential failures or successes of a player. These limitations also released me from the burden face by many game developers-- that of the many faceted layers of technical production (visual and sound asset creation, level design, programming architectures). CUBEISM consists of a of short scenes which progress based on a timer that I set. Like a collection of poetry, each scene is complete in itself. What then became important was how to  best arrange these scenes. For that, I thought of how games attempt to teach players how to interact with them. By starting with very simple scenes, the first being just one camera and one light on a cube which is in the center of the screen, and gradually moving up in complexity I was looking to teach the player how I arrived at the more complex scenes. I now realize that, unless someone already has knowledge of how 3D realtime graphics work, this piece fails entirely at being didactic. The game engine makes any elements that aren't specifically visual disappear. Things like camera settings are not exposed. If there were no explanation that the game is only 1 cube then it would be impossible to tell that there weren't more. Knowing this, the variety of scenes operates as a wonderous device, possibly looking like I was doing something impressive with code to make these things happen. The specifics of how it happened aren't particularly important, either to the player or to me in the process of composing. now that i have a better grasp on how they work it is harder to access this same mode of wonder, although despite my attempts to understand the unity render pipeline the process of rendering a cube is still magical. The sound I chose was meant to be as equally utilitarian and simple as possible-- a sine wave at middle c. Having this simple tone both gave the cube more physical presence and revealed the ways Unity processes sounds. But because a scene will only accept one audio listener (the point in 3D space from which it tries to spatially emulate nearby sounds) I had to use multiple instances of the tone and adjust their pitches to create variety. this process of creating small fragments has become important to how i approach making videogames, allowing me to set an interesting set of rules (an important part of any art making) and accumulating scenes and ideas until it feels full. 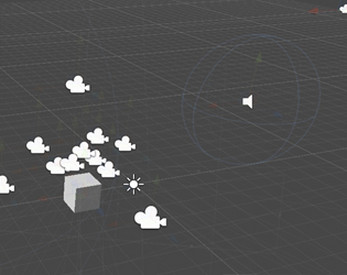